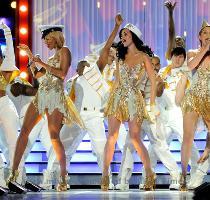 LOS ANGELES (GaeaTimes.com)-It looks like the American troops had the night of the lives as some of the biggest female stars got down to business at the ‘VH1 Divas Salute The Troops‘. While some of the divas chose sexy dresses that were military-themed, some chose give the troops a perfect visual treat with their revealing dresses.

Among the stars who performed at the ‘VH1 Divas Salute The Troops‘ event, Katy Perry stood out for her extraordinary performances and equally eye-popping dresses. She performed her hit ‘Fireworks’ which was also a part of the recent Victoria’s Secret Fashion Show 2010. The ‘California Gurl’ changed her look thrice in the star-studded evening and each time the audience and the troops appeared equally bedazzled. Wearing a red daring gown during the performance, Katy Perry sent the temperatures soaring. She also
put on a stunning short military-themed dress for the red carpet that surely grabbed the eyeballs of the soldiers. Her joint performance with Keri Hilson and the other stars, saw the women don a seriously sexy white and gold mesh corset.

The ‘VH1 Divas Salute The Troops’ also had performance by Grace Potter and the Nocturnals. Reality sensations Mike ‘The Situation’ Sorrentino and ‘Snooki’ were also seen at the prestigious event that was aired on Vh1. Nicki Minaj stood out for her unusual choice of wig and a multicolored long sleeved dress. Keri Hilson who was her graceful best on stage as well as the red carpet, shouted out her appreciation for the troops during her performance. Comedian Kathy Griffin ensured that the night did not go dull for a second with her hilarious stunts on stage.