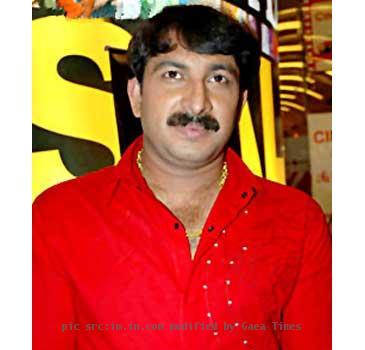 MUMBAI, INDIA (GaeaTimes.com)- Manoj Tiwari, got evicted from the ‘Bigg Boss’ house yesterday. He was quite disappointed with the elimination, as he never wanted to get out of the house on that particular day. This was because, he was nominated with Ashmit Patel, who recently became one of his foes on the reality show. Ashmit Patel remaining inside the house with maximum votes, was not something that Manoj Tiwari could accept with an open mind.

A few days ago Manoj Tiwari had a huge fight with Ashmit Patel and his newly acquired beau on the show Veena Malik, over a glass of milk. An ill Ashmit Patel wanted to have his share of hot milk in an odd time which was not acceptable to Manoj Tiwari as it would reduce the quantity of the drink for the entire week. This erupted a huge fight between the two, and since then, they have been sharing very cold terms. Getting defeated by Ashmit Patel was therefore the last thing that he wanted to happen. Moreover, he was under the impression that he had a huge fan following given his star status in Bhojpuri movies. It seems that just a handful of fans in Bihar was not enough to combat the larger fraction of people all over India.

More over, for various other reasons, his popularity in the house was getting reduced each day. That is why no one bothered to get out of their seats, when his name was announced for the elimination. It was only Great Khali, Shweta Tiwari and Seema Parihar, who bothered to bid Manoj Tiwari the last adieu. Before getting out of the house, he nominated Sameer Soni and Sara Khan.

Ambassador Car To Get A New Look

KOLKATA, INDIA (GaeaTimes.com)- The iconic Ambassador car made by the Kolkata based Indian autom...

KOLKATA - Three activists of the Communist Party of India-Marxist (CPI-M) were killed by suspected M...

New Ambassador variant to be unveiled in December

KOLKATA - The first prototype of a new variant of the Ambassador, the flagship car of the C.K. Birla...

LUCKNOW - Three government hospital staffers, including a doctor, were arrested in Moradabad distric...

KOLKATA - No untoward incident was reported Wednesday on the second day of the 48-hour shutdown call...
Copyright© 2010 The Gaea Times