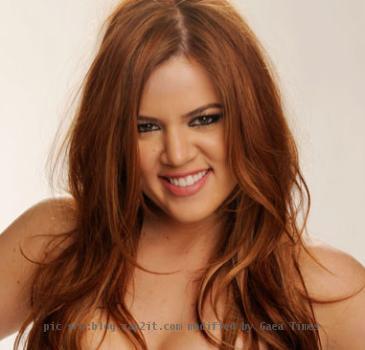 LOS ANGELES (GaeaTimes.com)- If anyone wants tips about how to surprise people with new style statement, then Khloe Kardashian is the one to learn it from. Recently, she colored her hair red, in order to turn every head towards her, at the People’s Choice Awards In Nokia Theater.

Before the awards ceremony just kicked off, her petite and hot sister Kim Kardashian, tweeted that she is getting ready for the awards with her sisters. She also added that Khloe Kardashian would be sporting a new look and hence she is looking forward to see her. At that time, no one knew that Khloe Kardashian’s Red hair would take everyone aback at the ceremony. Her color specialist Julie Canales said that Khloe Kardashian wanted to sport a “fiery new Look” for quite sometime. However, one day she brought a photo of a model with red hair and asked Julie Canales to give her the same look. Julie Canales said that the reality star was pretty sure about what she wanted to do with her hair, and asked her to color it on similar lines, with a different style statement, that would complement her overall personality and looks.

And then emerged the new and improved Khloe Kardashian’s Red hair. Julie Canales said that her client was smart and spunky and therefore, the hair color complimented her image. Moreover, Khloe Kardashian and her husband Lamar Odom, are all set to launch their very own eight episode series on E!, reportedly named “Khloe & Lamar”. In that case, sporting a new look, on a new show, was rather inevitable for the lavish lady. Lisa Berger, from E!, confirmed the news and said that they had to give a show to the dynamic couple, as they are fascinating and power-packed individuals.

My sisters made be a better designer: Kim Kardashian

LONDON - Kim Kardashian's opening of a new clothing store in New York was marred by arrests as pol...

WASHINGTON - Kim Kardashian has accused younger sister Khloe of 'attacking' her at her 30th birthday...

LONDON - Socialite Kim Kardashian has revealed she is "totally fine" after being attacked in a New Y...

WASHINGTON - Kim Kardashian has apparently taken to blogging to reach out to everyone who is concern...
Copyright© 2011 The Gaea Times