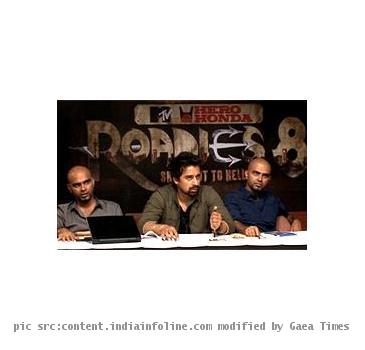 MUMBAI, INDIA (GaeaTimes.com)- The cult MTV reality show ‘Roadies‘ which premiered its latest season on January 22 with the Chandigarh auditions, was back last night with the ardent followers of the show tuning in to watch the audition episode of the national capital. The deadly trio of Raghu Ram, his twin brother Rajiv and Rannvijay Singh, stopped by New Delhi in the latest episode on their hunt to find a bunch of spirited youngsters who fear nothing and are ready to take up any challenge that they might have to face in the reality series. With the Chandigarh auditions of ‘Roadies 8′ making it clear that dream of the aspiring contestants to get selected on the show is not going to be a cake-walk, the New Delhi auditions that were aired last night were no different with aggression oozing from both sides of the table.

Just like all the previous audition, ‘Roadies 8′ New Delhi auditions also witnessed the presence of thousands of enthusiastic participants who had turned up to give their best shot and impress the judges for a stint on reality television. Bracing the chilly Delhi weather, thousands queued up to try their luck on the show to prove themselves worthy enough to be called ‘Roadies.’

During last night’s episode of ‘Roadies 8‘, while some of the contestants are able to impress the judges trio, many of them have to face their fury as the panel grilled them to their core in a bid to find the true ‘Roadie’ spirit in them. However, to know which of the contestants were selected from New Delhi, don’t forget to tune into the show tonight on MTV.