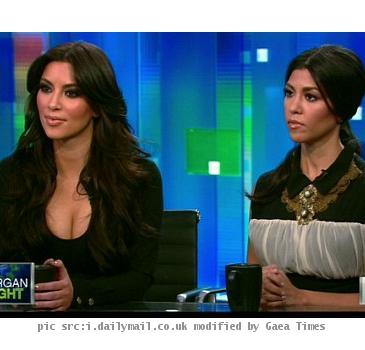 LOS ANGELES (GaeaTimes.com)- All the die-hard fans of hottie Kim Kardashian were in for a huge treat late last week when the sexy bombshell added a glamor quotient to British host Piers Morgan’s talk show on CNN by making an appearance. Viewers who had tuned in to watch the much-awaited episode that aired on Thursday night were left glued to the television screens as the socialite opened up about a variety of topics including her infamous sex tape with former flame Ray J that leaked on the web. However, Kim Kardashian was not the only one seizing the limelight on the CNN show as she was also accompanied by her older sister Kourtney Kardashian.

During the one-on-one with Piers Morgan, Kim Kardashian also talked about the pain and humiliation that she felt when the intimate sex tape with her former beau went viral on the web. The 30-year-old reality star told the British host that she was extremely ashamed when the sex tape was leaked while adding that the only silver lining in her life back then was the presence of her boyfriend Reggie Bush who really helped her through the entire ordeal.

The Thursday night’s episode of Piers Morgan’s show delved on a number of personal matters with the British host probing the sisters about whether they had indeed gone under the knife to enhance their assets. While Kim Kardashian emphasized that her breasts were ‘100 per cent real,’ her older sister Kourtney Kardashian admitted that she had got herself operated in a bid to accentuate her assets. Meanwhile, Piers Morgan also pointed out that all the Kardashian sisters were among the top 100 people followed on Twitter.