“Real Housewives Of Beverly Hills” Reunion Not A Happy One 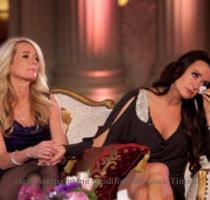 LOS ANGELES (GaeaTimes.com)- All is still not well for the Richards sisters who are sharing a cold relation in between them ever since they fought badly at the reality show “Real Housewives of Beverly Hills“. A few days back audience witnessed an ugly fight between the celebrity housewives Kim and Kyle Richards who also happen to be sisters. The much awaited reunion of the show that premiered last night witnessed that the ladies are still in no mood to patch up.

The reunion episode of the “Real Housewives of Beverly Hills” made it evident that the ladies are up any time when they smell an opportunity for lashing back at each other. It was only a few days back that sister Kyle Richards had accused Kim Richards of being an alcoholic and also called her delusional. Kim Richards getting no one by her side had left the show in tears. Kyle Richards too followed her to the limousine and abused her blaming her for several issues, some of which were related to their family. Even though it has been quite some time that the incident took place but sources have revealed that the tension between the two sisters has not wiped away completely. A production insider revealed that problems are still lingering them and the family too is going through a bad time.

Reportedly, Kim Richards was checked into a rehab by her family after the spat had followed between Kyle and her. The coldness was predictable at the reunion episode. Kyle Richards, however, has expressed her desire to be be in a show with Kim Richards. Kyle Richards said that if she receives the opportunity to be in any other season of the “Real Housewives of Beverly Hills” along with sister Kim Richards, she will not let it go away.