Ernest Borgnine To Be Honored 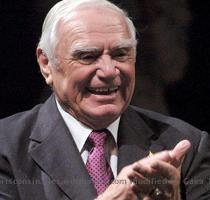 LOS ANGELES (GaeaTimes.com)- Come tonight and the Screen Actors Guild Awards 2011 will honor veteran actor Ernest Borgnine with the Lifetime Achievement Award. Not many would disagree that the ace actor deserves this award for his contribution in the film arena has been vast. According to sources, Tim Conway who is not only a fellow actor of Ernest Borgnine but also a close friend will present Ernest Borgnine with the award on Sunday night at the Shrine Exhibition Center, Los Angeles.

Ernest Borgnine on January 24 turned 94 but still has not taken a retirement from his acting career. With an acting career that has crossed sixty years ever since it began in 1949, Ernest Borgnine has continued to amaze audience with his superb performances enacting diverse roles. Even though he donned varied roles but what suited him the best was the his cowboy and military roles. Movies which have made him memorable are “The Poseidon Adventure” “The Wild Bunch”, “The Dirty Dozen” and the hit “Marty” for which he won an Oscar in 1955. Sources reveal that all these films are likely to be featured while Ernest Borgnine receives the Lifetime Achievement Award on Sunday.

Apart from films, the actor has also entertained his audience with his scintillating stage and television roles. Ernest Borgnine’s television career lists out his memorable roles that he did for shows like “McHale’s Navy”, “All Quiet on the Western Front”, “Airwolf,” “Little House on the Prairie”, “The Single Guy”. That the jury has decided to felicitate him at the prestigious award ceremony for the Life time Achievement Award reveals all that he has given to the world of acting.

Verdasco rallies from brink to victory

PARIS - Fernando Verdasco fought for his life Tuesday to stay in contention for the ATP year-end fin...

WASHINGTON - Alcohol and nicotine dependence can be treated simultaneously with the help of two new ...

WELLINGTON - Chris Gayle has been sacked as West Indies skipper and will be replaced by all-rounde...

Remarks by the President on the Economy in Bladensburg, Maryland