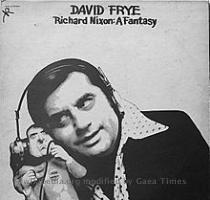 LAS VEGAS (GaeaTimes.com)- Noted comedy artist David Frye, best known for his impressions of U.S. President Richard Nixon as well as Lyndon Johnson, breathed his last on January 24, it has been reported. Although the renowned comedian died earlier this week, the news of his demise was revealed to the media on Saturday through a statement that was issued by his family. The death of the 77-year-old noted comedian comes on the heels of the demise of another highly-acclaimed comedy artist from Las Vegas, Charlie Callas who passed away on Thursday at a hospice care in the Nevada capital.

According to Mike Murphy, the Clark County Coroner of the state of Nevada, David Frye breathed his last on Monday at his Las Vegas home after experiencing a cardiopulmonary arrest. The much-loved comedy artist’s sister, Ruth Welch later stated to a reputed media outlet that David Frye was terribly missed by his whole family while adding that he was an extremely generous person as well as a good brother. David Frye’s sister also went on to say that the comedian could get mannerisms and intonations of people perfectly as he had an ‘an eye for people’s movements and an ear for their voices.’

David Frye reached the zenith of popularity in the 1960’s and 70’s with his hilarious impressions of President Richard Nixon as well as a host of other prominent political personalities. Apart from his performances in nightclubs and colleges and other venues, the comedy artist also made his presence felt on television by making appearances on shows such as “The Tonight Show Starring Johnny Carson,” “Ed Sullivan Show,” among others.

NEW DELHI - Britain's Defence Secretary Liam Fox has said that the perpetrators of the 2008 Mumbai t...
Copyright© 2011 The Gaea Times