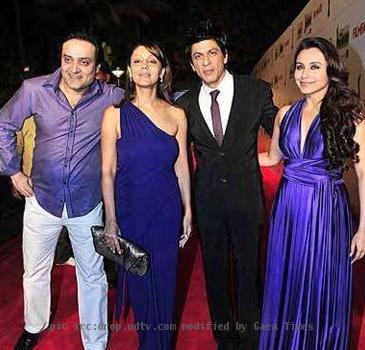 MUMBAI, INDIA(GaeaTimes.com)- The star studded 56th Idea Filmfare Awards was made all more glamorous with the red carpet walk, marked with expensive clothes and impeccable make-up by the celebrities of Bollywood. Every celebrity was sporting the best of their looks to make the event as glamorous as they themselves are.

In the 56th Idea Filmfare Awards, Aishwarya Rai who is always known for her unique and graceful sense of dressing, draped a beige colored Georgette sari that was richly embellished with golden work all over. She left her hair open, which has now become a trademark hairstyle of the ace actress. On the other hand, Rani Mukherjee, who always prefers to wear a sari during any high profile page 3 event, deviated from her personal style statement and wore an electric blue, deep necked sleeveless gown. The other lady, who looked at her best in the same color was Shah Rukh Khan’s better half, Gauri Khan. Her single shouldered body hugging gown, made her look prettier, as she walked down the red carpet with the Badshah of Bollywood and Tinsel town queen, Rani Mukherjee. Neha Dhupia also opted for navy blue, like many other actresses. Her “Action Replay” hangover is perhaps still on, and therefore, even her hairstyle aligned a lot to that of the retro era. Prachi Desai sported a very Spanish senorita look, as she loosely parted a hair and left her curls partially open in the front, with a plait hanging on her left shoulder. Her mild baby pink spaghetti dress complemented her girly and effeminate persona.

56th Idea Filmfare Awards witnessed newbie Sonakshi Sinha and veteran Rekha in green. Where Rekha preferred a sari, young and vibrant Sonakshi Sinha wore a dress. Suzane Khan once again proved that she is no less bolder than the rest of the Bollywood star wives, and she looked vibrant in her bright red gown. Ever her hot and hunky husband, Hrithik Roshan, sported a gray blazer to make themselves the biggest head turners of the event.

SYDNEY - John McEnroe has advised Lleyton Hewitt to consider retirement. In Sydney for the Champio...

SANYA - A double bogey towards the closing stages spoiled what was looking to be fine opening round ...

NEW DELHI - India came within a whisker of losing, but pulled up their socks in the nick of time to ...

Rossi and Altidore start together for VillarrealVillarreal triumphed with the Jersey Boys of Giusepp...

JOHN LEGEND and THE ROOTS turned heads on the streets of New York on Thursday night (23Sep10) when t...

Liverpool, Chelsea, Manchester City knocked out of English League Cup in 3rd round