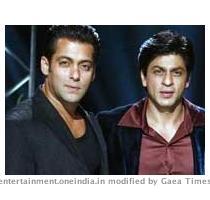 MUMBAI, INDIA (GaeaTimes.com)- The rivalry between two of Bollywood’s superstars still continue to rule as it is evident that both Shah Rukh Khan and Salman Khan are in no mood to patch up. The spat between the two Khans is not something new except for that the clash got more conspicuous during the recent Star Screen Awards 2011. The award function that took place in Mumbai on Thursday witnessed the presence of almost the entire film fraternity. The starry night saw Bollywood Badshah Shah Rukh Khan hosting the event along with actor Shahid Kapoor.

Salman Khan who received the Best Actor Award for the 2010 hit “Dabangg” was seen making a short appearance at the grand event. Although he was present at the venue but raised eyebrows when he refused to go to the stage to collect the award himself. Instead it was brother Arbaaz Khan who on behalf of Salman Khan went on stage to collect the trophy. A little birdie said that it was obvious that both Shah Rukh Khan and Salman Khan who were attending the Star Screen Awards 2011 had no intention to come face to face with each other. Those present at the venue could easily guess that the “Dabangg” star wished not to step onto the stage lest he had to encounter King Khan.

The rivalry between the two Bollywood big shots dates back to two years back when trouble surfaced at the birthday bash of Salman Khan leading to an ugly fight between the two. Fans of the both the stars who wished that they would get to see some patch-up between them were left disappointed after what recently occurred at the Star Screen Awards 2011.

MUMBAI - They were on duty that day when terrorists struck in Mumbai two years ago. The memories of ...

ISLAMABAD - A woman in Pakistan's Larkana district claims that her husband, who is a gambler, has so...

MUMBAI - An insurance regulator who is on a learning curve and life insurance chief executives who d...

LONDON - An Al Qaeda group in Somalia has boasted that it plans to launch several smaller-scale ...
Copyright© 2011 The Gaea Times