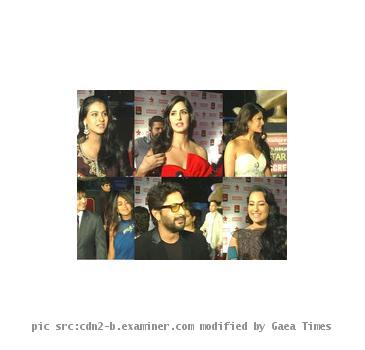 MUMBAI, INDIA (GaeaTimes.com)- The annual Star Screen Awards 2011, took place in Mumbai on Jan 6. This high profile Bollywood event took off for the 17th time, to pay an ode to the best performers of the year. It marked the presence of almost each and every star in the Indian film industry and therefore, this memorable event stirred the spirit of yet another rocking new year to promise some more block busters and critically acclaimed hits for 2011.

The best actor award in the Star Screen Awards 2011 went to Salman Khan for his year’s hit “Dabangg”, while Vidya Balan won the female counterpart for “Ishqiya”. The Popular Choice best male actor was bagged by none other than the Bollywood Badshah, “Shah Rukh Khan”. Katrina Kaif proved her worth, as a critically acclaimed actress for the first time, as she bagged the Popular Choice best female actor for “Rajneeti”. This was also an overwhelming achievement for her, because, now, in terms of awards, she is quite at par with Shah Rukh Khan. The film “Udaan” won three awards, the best film award, the best director award, (Vikramaditya Motwane) and the best actor in negative role award, (Ronit Roy). The best actor in supporting role, was won by Arshad Warsi for “Ishqiya”, while Shernaz Patel was elected as the best female in supporting role for “Guzaarish”.

LONDON - Colin Firth has always been viewed as the typical English gentleman with his 'dashing' Br...
Copyright© 2011 The Gaea Times