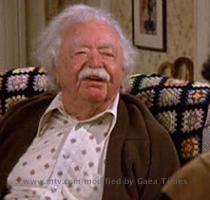 LOS ANGELES (GaeaTimes.com)- Veteran actor Bill Erwin died at the age of 96 in his own home at Studio City in suburban Los Angeles. The incident took place on December 29. Yet, he is one of the most trending person in the internet, due to all his contribution in the world of television through out the last five decades. His son Mike Erwin said to a reputed news source that he died out of natural causes.

Mike Erwin, from his Jacksonville home in Oregon said that his father “ran out of gas”. He also said that he was happy to the end. The 96 year old veteran actor, has always been very happy and cheerful in his personal life, but his age restrained him from living any longer. He is survived by his two sons, namely, Timothy Erwin and Mike Erwin; two daughters, Lindsey Thomas Erwin and Kelly Erwin; his sister Mary Gene Cosper, and eight grand children. Bill Erwin was best known for his cult on-screen character, Sid Fields, in the 1993 show, “Sienfield”. He was known for his foul mouth and paranoid disposition, that immortalized him forever, even when the show went off air, He said in the show that he was not born yesterday, and he might drop dead today. Perhaps, today, the all his fans are commemorating this famous dialogue of his today.

Another film that immortalized him as an actor was “Somewhere in Time”, where Bill Erwin worked with Christopher Reeve and Jane Seymour. It was a time-travel and a romantic drama, that was shot in Grand Hotel, of Mackinac Island in Michigan. Every year he used to spend some time with his fans in the same hotel, as he created his own cult, amongst the people of Mackinac Island, through the character, Arthur the Bellman, that he portrayed in the movie.

LONDON - Former England cricket captain Mike Gatting has said that he has fond memories of England's...
Copyright© 2011 The Gaea Times