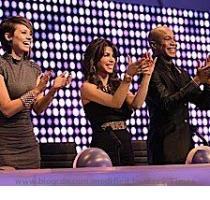 LOS ANGELES (GaeaTimes.com)- It seems that “Live To Dance” is going to give yet another foot tapping dancing treat to every audience across the nation. The pilot episode took off yesterday on CBS and that revealed the three judges for this dance based reality show. The three judges, Paula Abdul, Travis Payne and Kimberly Wyatt, are surely going to have a tough time, selecting the best out of the lot. Sources say, the main appeal of the show, will surely be attributed to the skilled judges.

Yesterday, 26 contestant were auditioned, out of whom, 10 got three gold stars, 3 people got two gold stars. In order to get listed under the judge’s expert short list, a contestant has to collect at least two gold stars from each of the “Live To Dance” judges. Therefore, the competition seems to have already started. Nevertheless, it seemed like the three judges were quite disconnected with each other and hardly consulted when they had to arrive at a conclusion. However, they might have done that when the camera was not rolling. A lot of emotional speeches came out of each judges, when the results were declared. Sometimes, even the judges were also seen grooving with the dancers, while cheering and motivating them. Paula Abdul was seen with tears several times. However, that was not because she was sad. She rather found some of the acts to be too inspiring and motivational. She was seen crying for young acts, older acts, and definitely the ones from the Solid Gold dancers.

On the other hand, one could also understand that out of the three “Live To Dance” judges, it would only be Travis Payne and Kimberly Wyatt, who would correctly judge the technical aspects of the performances, as Paula Abdul herself was indecisive about the intricate aspects of the performances. Travis Payne, who has been Michael Jackson’s choreographer, gave a mixed and balanced judgment to every contestants, and so did the Pussycat Dolls founder, Kimberly Wyatt.