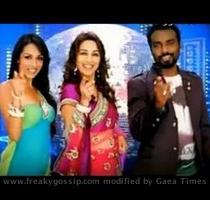 MUMBAI, INDIA (GaeaTimes.com)- “Jhalak Dikhla Jaa 4″ kick started yesterday. It seems that the competition is going to even tougher this time with contestants like Yana Gupta and Sushant Rajput, who would be judged by the strict and perfectionist dancer of all times, Madhuri Dixit.

Yesterday’s episode marked the first competition, of this season of “Jhalak Dikhla Jaa 4″. It started with the performance of Sushant Rajput, who performed on the famous retro hit from the movie “Karz”. Even Ragini Khanna, who is otherwise not a trained dancer, grooved really well, with “Uff Teri Ada”. However, the judges said that her steps were a bit amateurish and too slow for the Broadway Jazz. Renuka Shahane, despite her old age, tried her best to cope with the rich footsteps of her choreographer, and could impress the judges with her Jazzy performance. Anushka Manchanda, who is otherwise a singer said that singing the title track from the film “Aisha” was too easy for her, but dancing on the same song was rather difficult. They showed how hard she had to work in order to get her steps right. Yana Gupta, was one of the hottest performers. She sported a bikini and a trouser, to tap with the classic “Babuji Dhire Chalna”. However, soon the song was merged with her cult item number, “Babuji Zara Dhire Chalo”. Her hip shaking and sensuous movements, won many people’s heart. However, it was Shekhar Suman who emerged as the hot favorite surprisingly. He scored the highest with his Samba performance.

“Jhalak Dikhla Jaa 4″ will showcase the performance of six other contestants today. It will also have three more guests, Akshay Kumar, Katrina Kaif and Farah Khan, who would visit the set to promote their next movie, “Tees Maar Khan”.