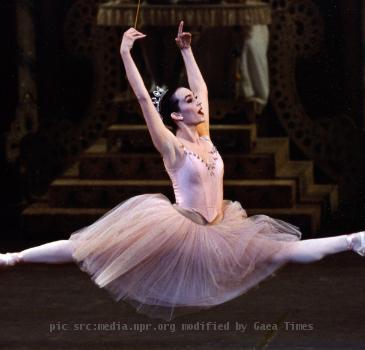 NEW YORK (GaeaTimes.com)- A New York City ballerina who was criticized by a leading critic for being overweight during her performance as the Sugar Plum Fairy in the New York City Ballet production of ‘The Nutcracker’ has reacted to the maligning comments. The noted ballet dancer Jenifer Ringer appeared on the ‘Today’ show of NBC where she talked at lengths about the controversy that ensued after a reputed critic wrote in his review that the 37-year-old dancer ‘looked as if she’d eaten one sugar plum too many.’ The review that was written by leading ballet critic Alastair MaCaulay in a reputed newspaper gained extensive negative attention across the web with many netizens defending Jenifer Ringer.

The widespread support that Jenifer Ringer received from many people on the web was mainly owing to the fact that the renowned ballet dancer is known to have been struggling with issues such as anorexia as well as compulsive eating but was able to overcome them to become one of the most popular dancers of the New York City Ballet. Meanwhile, in her television interview on the hit NBC chat show, Jenifer Ringer stressed that despite the fact that the remarks surely made her feel bad initially, it dawned upon her that as a dancer, she puts herself out to be criticized while adding that her body was just nothing but a part of her art form.

While reiterating that she could not be described as overweight, Jenifer Ringer also emphasized that the scathing remarks is the opinion of a single person and also expressed hope that the other 2,000 people who watched the show must have felt otherwise.

10 years after its approval by FDA, abortion pill faces new turmoil over telemedicine

After 10 years in US, abortion pill still divisiveNEW YORK â Ten years ago, after long and bitt...

Florence Henderson Not Old At 76

One Million in Hair Insurance For Troy Polamalu

PITTSBURG (GaeaTimes.com -- Troy Polamalu's hair is now worth a million Dollars. The Lloyds of L...

LOS ANGELES (GaeaTimes.com) -- The cast for this seasons Dancing With The Stars has been reveale...

John Mayer is Rumored to be Back with Jennifer Aniston!!

LOS ANGELES (GaeaTimes.com) -- It is rumored that celebrated singer John Mayer is considering to...

MUMBAI, INDIA (GaeaTimes.com)-Noureen DeWulf is aspiring to be a Bollywood actress and that's a di...
Copyright© 2010 The Gaea Times