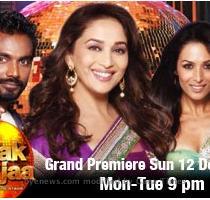 MUMBAI, INDIA (GaeaTimes.com)- The popular foot tapping dance reality show is back again on Sony Entertainment Television. Jhalak Dikhla Jaa 4 is back again to groove the audiences with is high standard of dance quality. This time however, there is a new surprising twist, as the ever popular Bollywood actress and the cult dance diva Madhuri Dixit would be sharing the panel of Judges with Malaika Arora Khan and Remo D’Souza.

Jhalak Dikhla Jaa 4 was premiered yesterday on Sony Entertainment Television, as Kaun Banega Crorepati season 4 was wrapped up on December 9. Jhalak Dikhla Jaa 4 will mark the cut throat competition of 12 contestants, who would be dancing with their choreographer partners, to win the hearts of the audiences and the three judges. The twelve contestants of this season include, Sushant Singh Rajput, who is a popular television actor and model; singer Anushka Manchanda; actress and model Ankita Lokhande, Ragini Khanna, Mahii Vij and Renuka Shahane. The famous item number specialist, who became more famous for her allergy towards underwear, Yana Gupta is also expected to throw tough competition. However, it is not the pretty faces but also hardy people like boxer Akhil Kumar, and the Badmaash Companion Meiyang Chang, who would explore their dance potential the sets. Shekhar Suman, who is still having a high adrenalin rush in his 50s, would try to make his mark as a dancer along with comedian Krushna Abhishek.

The show would be hosted by Sony’s favorite child Mona Singh and Sumeet Raghavan. Jhalak Dikhla Jaa 4 was premiered yesterday and it gave a strong proof that the competition is going to be tougher this time with some really competent and hard working contestants. Yesterday, each of the judges kicked off the show with their famous dance numbers to set the spirit for the rest of the season.