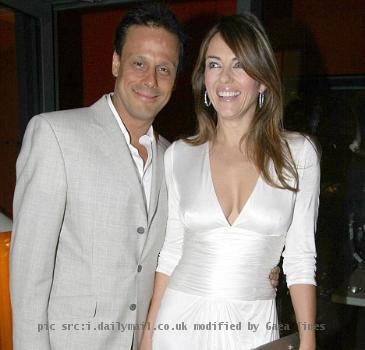 LONDON (GaeaTimes.com)- Renowned model and actress Elizabeth Hurley aka Liz Hurley has finally taken to the homepage of her social networking site to announce that she has separated from her husband Arun Nayar. The British actress announced the news of their split on Sunday. The gossip portals are of the opinion that the couple has separated because of Elizabeth Hurley’s affair with cricket ace Shane Warne.

Liz Hurley wrote in the homepage of her social networking site that she has separated from her husband Arun Nayar few moths ago. Though the sultry model did not specify any reason for the split but it seems that the couple has separated mutually. Moreover, she also stated that their close friends and family were aware of the divorce. Arun Nayar and Elizabeth Hurley exchanged vows three years ago in a lavish ceremony. “Four Weddings and a Funeral” actress has an eight year old son Damian from her previous marriage. However, it is yet not clear why the couple chose to keep the separation a hush hush affair.

A British tabloid reportedly published intimate photos of Liz Hurley and Shane Warne. The photos created wave in the media as they started speculating that the model is cheating on her husband. However, the “Bedazzled” actress took to Twitter to confirm that she has not cheated on her husband as the couple has already parted ways few months ago. The media outlets reported that Shane Warne and Elizabeth Hurley exchange flirtatious messages on Twitter regularly. Moreover, a reputed newspaper published the photos of Elizabeth Hurley and Shane Warne and claimed that the actress has spent two nights with Shane Warne in London. However, Arun Nayar was unavailable for any comments.

CANBERRA - A Victorian judge has suggested that some youths should be "put in a dark cupboard at 16 ...

WASHINGTON - A new study has revealed that one in three people associates the brand identity of No...

JAIPUR - Marriages may be made in heaven, but many are surely billed in Rajasthan. From Indophile ce...

LONDON - It seems Elizabeth Hurley can't do without Enid Blyton's books. She may seem the kind of gi...

Cheryl Cole gets her wax statue at Madame Tussauds

LONDON - Singer Cheryl Cole is the latest star to be honoured with her own wax replica figure by fam...