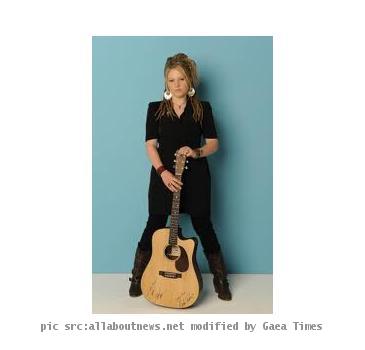 LOS ANGELES (GaeaTimes.com)- “American Idol” season 9 runner-up Crystal Bowersox is all set to release her debut album “Farmer’s Daughter” on December 14. The singer is presently busy on the promotional activities and on Friday night, she appeared on “The Tonight Show” with Jay Leno where she sang the title track of her album. The audience loved her performance and they appreciated it as the song mainly deals with her childhood experiences and her journey before “American Idol”. Apart from “The Tonight Show”, she will also appear on “The Ellen DeGeneres Show” and in CitySights NY holiday event where the young singer will be giving gifts to children.

Crystal Bowersox seemed excited when asked about her debut venture. In an interview to a reputed media source, the happily married singer said there are 12 tracks on her album and she has written 10 of them whereas she has co-written two tracks. She said that the majority of the songs that she has written is inspired from her personal life. The singer said that the album is her story and she is happy to share her thoughts and feelings with everyone. The “American Idol” runner-up said that while she was co-writing with others, she had to toil hard but ultimately there was no fruitful result. Crystal Bowersox compared her co-writing with “first date” where she was clueless about everything.

Crystal Bowersox praised her husband Brian Walker and said she co-wrote a song with him as well. She said that she wanted to work with Linda Perry but due to unavoidable circumstances, things did not work out. Her much anticipated album “Farmer’s Daughter” mainly deals with her childhood. It is the tale of a girl who stayed with abusive and alcoholic parents.