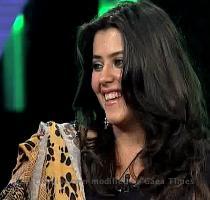 MUMBAI, INDIA (GaeaTimes.com)- Guess who was the latest celebrity to grace ‘Bigg Boss 4’s Akhri Salaam? The obvious prediction would be the newly-evicted Sarah Khan and her “Shauhar” Ali Merchant but as expected the show always comes up with surprises. This time it was non other than the soap queen, Ekta Kapoor herself. She surprised and delighted the audiences in the set, when she sat down with Salman Khan to promote her upcoming film, “Ragini MMS”.

However, when she appeared on the sets, the movie rather took a backseat, and the main focus went on the humorous conversation between Salman Khan and his close pal, Ekta Kapoor, who supposedly share a very good rapport. She was looking extremely stunning and graceful in her black full sleeve salwar kurta, open traces and dark kohl line. Most of the time, the lady appears in a very simple make up, with a down to earth disposition. However, this time, she made an exception, to look prettier. And why not? One cannot think about looking ordinary, if she is asked to appear with none other than the deadly handsome Salman Khan. Nevertheless, the two started discussing on their upcoming film, but Salman Khan seemed more interested to know something else.

He grilled her by saying that now he would be throwing the question, that the star himself comes across the most frequently, that is, when would Ekta Kapoor get married? The witty Ekta Kapoor said that she would get married the moment she gets another Salman Khan. However, the Bollywood actor was even wittier, and with his spontaneous humor, he said that he would soon get married in order to produce another Salman Khan for her.

NEW DELHI - Only 30 percent of Delhi's slum children make it to school beyond the age of 14. But def...

I don't want to repeat my roles: Ronit Roy

DUBAI - The upcoming edition of the Dubai International Film Festival (DIFF), to be held Dec 12-19, ...

A sequel to 'Once Upon A Time In Mumbaai' isn't far: Ekta Kapoor

NEW DELHI - Producer Ekta Kapoor is very proud of the success of her production venture "Once Upon A...

MUMBAI - Not everyone can enjoy doing an entire film without a single dialogue. But usshar Kapoor, w...
Copyright© 2010 The Gaea Times