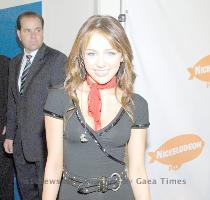 LOS ANGELES (GaeaTimes.com)- A lot of people have been wondering recently what Miley Cyrus smoked in that bong that got her high immediately. While the web has been abuzz with speculations, the truth is that she smoked a legal and herbal substance called Salvia. The herb is similar to tobacco and is legalized in California, which explains that lack of legal drama in the controversy.

Burnt or smoked Salvia herb creates an immediate hallucinating effect and it was evident from Miley Cyrus reaction that the effect was quite quick and strong. In the video that created waves on the web. Miley Cyrus is seen quickly under the effects of the natural drug and soon starts saying that she is one a trip. She even visualizes her former boyfriend. Her father Billy Ray Cyrus even expressed sadness and shock at the video and took to Twitter to vent his emotions.

Reports indicate that Salvia is found easily in smoke and tobacco shops across California. The herb has been in use for decades and is used by religious leaders for healing purposes in several places. The most common uses of the drug is in Mexico where tribals use. The herb is a part of the mint family and is also referred to as a type of sage in some parts. In spite of the legality and common use of the herb, its long term effects are not yet known. One drug expert has revealed that the herb has no short term effect which is harmful but further research in the plant is needed.