Rhema Marvanne Is Inspired By Tragedy 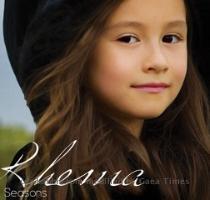 AUSTIN (GaeaTimes.com)- Rhema Marvanne is the latest musical sensation in the nation. However, unlike other popular singers, she deviates from the popular music genres to pursue Gospel music. Where most of the children of her age are more vulnerable to popular music, Rhema Marvanne believes in serving god by singing Gospel.

Lately ABC featured the eight year old Rhema Marvanne, in its popular show “20/20″. She was not only interviewed but also documented, to familiarize the people with her personal life. The show revealed that despite her young age, she has been through quite a lot of trauma. Her mother expired due to ovarian cancer when she was just three year old. At a time, when children are ignorant about the word “demise”, Rhema Marvanne was not only aware of her mothers condition and illness, but also made every possible effort to boost her morale and make her feel happy like a sensible adult. She said that she still has hazy memories of her mother like playing together, acting skits from the bibles and consoling each other during her treatment. Her mother, Wendi Marvanne, however could not survive long enough to witness the blooming talent of her daughter, but her demise has worked as an inspiration for her soulful music. She said that whenever she sings, she thinks about her mother. However, at an age when children are more attracted to jazzy stuffs, what made her evolve as a Gospel singer? Rhema Marvanne said that God called her for Gospel and she believes that Gospel can touch people’s heart.

Rhema Marvanne was just an ordinary girl a year ago. However, it was her father Teton Marvanne, who uploaded her video on the YouTube, where she was singing her mother’s favorite Gospel song. The divinity in her voice attracted more than 18 million views, to make her the latest Gospel sensation in the United States.

Rhema Marvanne: A Star is Born!