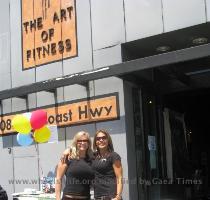 LOS ANGELES (GaeaTimes.com)- Brazilian fitness trainer, Fernanda Rocha is all set to heat up the cast of the ‘Real Housewives of Orange County’ quite soon. While several insiders have confirmed that the Brazilian bombshell will soon be joining the cast of the reality show, the web has been abuzz with the photos and details about the 33 year old fitness trainer.

Fernanda Rocha, however, is not a new face on TV as she was seen training the housewives in the 5th season. The Playboy hopeful has a body to die for and is also expected to being about some spice to the otherwise decent cast of ‘Real Housewives of OC’. She also said in an interview that she will be the first openly gay cast member on the show. Considering that the other members of the cast will have one less reason to fear their husbands being stolen, the inclusion of the Brazilian beauty is sure to spice up the dynamics.

Fernanda Rocha was also seen in a tiny bikini at Laguna Beach recently and going by her looks she sure adds the glam factor to the show’s 6th season. Fernanda Rocha has admitted that one of her foremost ambitions is to be the second lesbian Playboy centerfold. She said that she was not a bisexual and did not kiss girls for publicity. Reports indicate that she was married and recently got out of a lesbian relationship. Fernanda Rocha has also openly criticized housewives Danielle Staub and Kim Zolciak for their lesbian flings and said that it was just an experimental stage for the reality stars.

NEW DELHI - Pledging commitment to transforming the lives of women and helping them become self-sust...

Trial begins for actress accused of sham marriageLOS ANGELES â A Mexican-born actress and her m...

Trial of actress accused of sham marriage to beginLOS ANGELES â By all accounts, the marriage c...

Mexican actress FERNANDA ROMERO and her American husband KENT ROSS are due to stand trial this week ...

Alleged thief in Brazil trapped, killed by falling window as he escapes from abandoned house

Alleged thief killed by falling window in BrazilSAO PAULO â A would-be thief escaping from an a...

In return for billions from rich nations, Ecuador vows no oil drilling in Amazon preserve

In pact, Ecuador vows no oil drilling in preserveQUITO, Ecuador â Ecuador pledged in a pioneeri...
Copyright© 2010 The Gaea Times