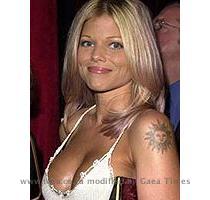 LOS ANGELES (GaeaTimes.com)- It looks like the TSA does not only single out those who look suspicious at the airports but also those with a body to die for. Former Playboy model and ‘Baywatch’ hottie Donna D’Errico said in a recent interview that she feels that the shape of her body and her looks was the main reason for the TSA agents to single her out and ask for a full body scan. The controversial body scanners are known for the explicit details of the body in the images and has been under heavy attack from the media as well as several celebs. Donna D’Errico said that the TSA should change the rule of randomly picking out people for the scan.

The 42 year old bombshell said that she was traveling to Pittsburgh with her 17-year old son and boyfriend. She also added that her boyfriend who had a more rugged look fitted the stereotypical image of a terrorist. She said that he went through the screening process smoothly and the male TSA agent held her elbow and took her for the full body scan. Donna D’Errico said that the male TSA agent said that he chose her for the scan because she caught his eye and the rest of the people in the line did not.

Donna D’Errico seemed to be unaware of the recent controversy surrounding the TSA. The American bombshell said that she does not watch the news nor reads the newspapers. She explained that she feels happy to not be aware of all the bad things that go on in the world and is content with the information that she gets from her own sources.

LONDON - A survey by the Etap Hotel group has revealed that a quarter of couples admit they sle...

NEW DELHI - She has repeatedly been on the list of the world's best dressed people and is known for ...

NEVADA - Hindus have applauded Misericordia University of Pennsylvania (USA), a Roman Catholic i...

CHICAGO - An American Airlines staffer has filed a lawsuit against the company, claiming that co-wor...

Remarks by the President at Domestic Violence Awareness Event

Your lingerie colour reveals the kind of lover you are

LONDON - Do you prefer black underwear to red? Or pink to white? A psychologist has revealed that p...

Remarks by the President at Rally for Maryland Governor Martin O'Malley