Sara Jean Underwood Is No More A Playmate 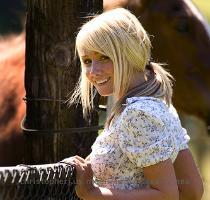 LOS ANGELES, (GaeaTimes.com)- Sara Jean Underwood, who was once known for her steamy snaps in the “Playboy” magazine, will come out of the stereotype to participate in the PokerStars Million Dollar Challenge. The new season of this show will be aired every Sunday, after the after Sunday NFL football on Fox Channel.

The producers of the show were initially hesitating to take Sara Jean Underwood in the show, because her image does not match with the format of this game show. She looks more like a model than like a poker player. Therefore, she had to undergo certain qualifying rounds in order to make a place for herself. However, till now no one is sure about what would her performance be like. However, all her fans are eagerly waiting to see her in the game. Some of them are even under the impression that she need not make any efforts to defeat her competitors as her looks are enough to kill them.

Sara Jean Underwood has been the most regularly featured “Playboy” playmate since 2007. Before that, she was one of the Pac-10 girls. When she joined “Playboy”, she was a student of Oregon State University and soon became the heartthrob of several men.