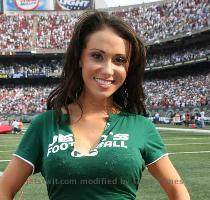 LOS ANGELES (GaeaTimes.com)- It looks like Jenn Sterger got tired of waiting for the NFL to take action and decided to take matters into her own hands. The former Playboy hottie had, reportedly, sold the photos of Brett Favre’s private parts to a website for $10K. The PR manager of Jenn Sterger told the media that Jenn Sterger would drop the litigation if the NFL took action against the Minnesota Vikings star. He also said that she was not interested in the money but wanted her name cleared. Interestingly though the web has been abuzz with her own photos that she shot for the Playboy magazine rather than the Brett Favre ’sexting’ pics.

Jenn Sterger had opened up about the sexual advances by Brett Favre and also said that she received raunchy photos of his private parts. The scandal became a huge rage when the reports of a lawsuit against the sports icon started doing the rounds. Jenn Sterger asked the NFL to suspend Brett Favre for sexually harassing her in spite of being married at the time. The Playboy model and New York Jets reporter said that though it was common for players to make advances towards her, Brett Favre took things to a whole new level.

Some reports indicate that the Playboy hottie, Jenn Sterger, had submitted more evidence about the ’sexting’ saga. The evidence included text messages where Brett Favre urged the model to send videos of herself. It is unclear whether Brett Favre himself has made efforts to stop the distribution of the photos on the web but it is clear that the scandal will take a lot more time to die down completely.

Minnesota, (Gaea Times.com) Brett Favre, who led his team to victory on Sunday against the Dalla...

MINNEAPOLIS (GaeaTimes.com)- The National Football League is looking into the controversy su...

NFL looking into allegations that Favre sent photos to reporter

NEW DELHI - In an action-packed match marked by amazing athleticism, New Zealand held off a fighting...
Copyright© 2010 The Gaea Times