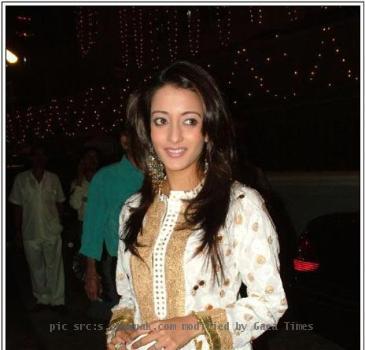 MUMBAI, INDIA (GaeaTimes.com)- The much talked about erotic comedy ‘Mirch’ directed by Vinay Shukla is releasing today and it has been making headlines for quite some time. Actress Raima Sen who is gradually making her presence felt with some author backed roles and acting skills in both offbeat and commercial cinema in India is in its cast and she plays a bold role in the movie. The movie has an interesting cast comprising of some of the most talented and successful Bollywood actors like Boman Irani, Konkona Sensharma, Mahie gill, Shreyas Talpade, Sahana Goswami among others. The plot of the film has 4 parallel stories and it portrays women as individuals who can tackle their sexuality without inhibition and middle class prejudice.

However, actress Raima Sen reportedly developed cold feet after acting in some explicit lovemaking scenes in ‘Mirch’ with her co actor Arunodoy Singh. After she watched the final cut she expressed anxiety of her parents getting miffed with the passionate scenes. She reportedly asked the director Vinay Shukla to shorten the lovemaking scenes in the movie. However actress Konkona Sensharma who also has done some bold scene in the movie is cool about the scenes.

Raima Sen did not elaborate on the lovemaking scenes in the movie. When she was asked about it she tried to sound diplomatic and remarked ” Yes, we did re-shoot the sequence on the director’s request. I’ve requested Vinayji to tone it down.” It is not known if the director has shortened the duration of the intense scene in Mirch or not. He insisted earlier that it was integral to the plot of his film.

KOLKATA - Bollywood actress Aishwarya Rai has said she is looking forward to working again with nati...

For many Kolkata celebs, home is where Durga Puja is

KOLKATA - Most people in Kolkata love to go hopping from marquee to marquee to witness Durga Puja fe...

NEW DELHI - Bollywood seems to have become a hot spot for Hollywood actors. From Sylvester Stallone,...

KOLKATA - Actress Raima Sen, who has made a name for herself in the Bengali film industry as wel...
Copyright© 2010 The Gaea Times