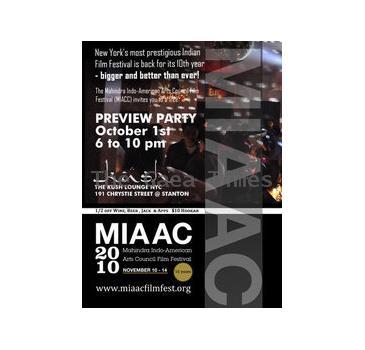 September 25, 2010 (Sampurn Wire): The 10th Annual Mahindra Indo-American Arts Council is being held in New York City from November 10th to 14th of 2010 and preparations for the event are in full swing. The MIAAC is throwing a Preview Party on October 1st to kick-off the grand 10th Anniversary of the Film Festival, which promises to be biggest and best showcase yet of Indo-American Cinema in the Tri-State area.

The Preview Party, to be held at the Kush Lounge in the Lower East Side of New York City, offers a chance to interact with the cast and crew of the films being showcase this year, as well as preview the line-up of selected films, which will all be screened for the first time in New York at the Festival.

There is also going to be a special Festival Sidebar, celebrating the life and work of the late Smita Patil, through the series ‘Bhumika - The Roles of Smita Patil’ to be held at the Walter Reade Theater in NY.

Tickets for the festival will be up for sale in October through various outlets, while the Preview Party is Free-for-all.

MUMBAI - Veteran actress Sharmila Tagore has starred with her daughter Soha Ali Khan for the fir...

A Wednesday! Dev D and Mumbai Meri Jaan nominated among films across 16 nations

After garnering accolades for their movies at Award Functions and Film festivals across the wo...
Copyright© 2010 The Gaea Times