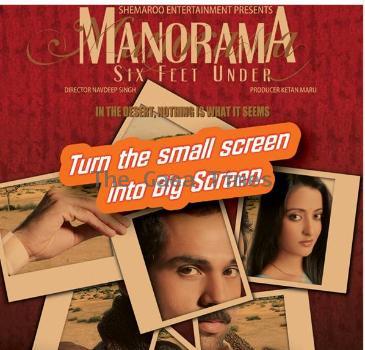 September 25, 2010 (Sampurn Wire): Rajasthan-based Satyaveer Singh Randhawa works as a Junior Engineer with Lahkot Municipality’s Public Works Department and lives a middle-class lifestyle with his wife, Nimmi, and son, Raju. The region faces drought and extreme temperatures, with the local Irrigation Minister, P.P. Rathore, making tall promises of diverting water from Haryana and Punjab via a canal that is being constructed on a controversial site. Satyeveer also authored a fictional novel ‘Manorama’ that sold only about 200 copies. So dismayed was he with this, that he decided to not even keep a copy for his private library. To make matters worse he accepts a motorbike from Seema Constructions as a bribe, is apprehended, and suspended pending an inquiry. Now out of a job, he is approached by Manorama Rathore, the wife of the Irrigation Minister, to collect evidence that her husband is having an extra-marital affair for a fee of Twenty thousand rupees…

Manorama Six Feet Under is a 2007 Indian thriller film directed and co-written by Navdeep Singh. The film features Abhay Deol, Raima Sen, Gul Panag in the lead roles. The movie was released on 21 September 2007.

This movie is based on Chinatown (1974) by Roman Polanski, with the basic premise being similar to the original, despite changes in the representation of characters and some key plot points. In a cinema-noir style, the makers of Manorama Six Feet Under acknowledge the inspiration from the original by playing the sequence where Jack Nicholson’s character gets his nose slashed on the main character’s (Satyaveer) television.

LONDON - Mae West was too old, too short, too voluptuous, too funny and too independent to be a sex ...

WASHINGTON - A new Saint Louis University study has revealed that a chemical that gives curry it...

NEW DELHI - Bikini-clad models dazzled as they walked the ramp for fashion designer Sanchita as she ...

NEW DELHI - A line-up of quirky, kitschy rickshaws styled by designers, and a wall full of their tra...

NEW DELHI - After staying away from TV soaps for a long time, television actor Jay Bhanushali is bac...

Forget the need for female Viagra, here are some natural ways to lift your libido

LONDON - After a hard day's work, sex is the last thing on the minds of working women. But forget th...

Katrina, Priyanka to heat up Salman's 'Being Human' show

MUMBAI - Salman Khan has roped in a bevy of beauties including his ex-girlfriend Katrina Kaif, co-st...
Copyright© 2010 The Gaea Times