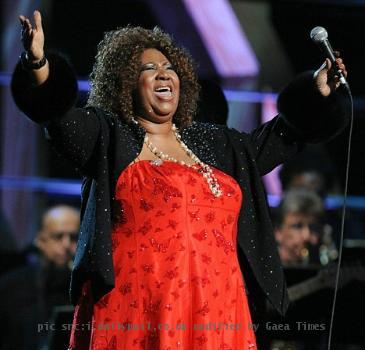 DETROIT (GaeaTimes.com)- Legendary singer Aretha Franklin is suffering from pancreatic cancer, the media reports. Last week the media outlets were abuzz about her surgery but the noted soul singer did not comment anything about the nature of her surgery. However, later her representative released a statement on behalf of Aretha Franklin where the singer thanked all her fans as the surgery was successful. However, recently a gossip site reported that one of Aretha Franklin’s representative said that though the surgery was successful, her family members are concerned about her and has asked everyone to send their love and prayers to the singer.

Aretha Franklin has been suffering from ill health from quite sometime now. She canceled all her tours, concerts and public appearances for her treatment. In August, she fell from the stage and broke her two ribs and hence she had to cancel her dates of joint tour with Condoleeza Rice. The Queen of Soul said that she had to cancel all her concerts because her doctors had asked her to do so. When asked about the pancreatic cancer, her representative refused to comment anything to the journalists.

Aretha Franklin visited Detroit hospital last month but the media outlets could not collect any details about it. If all the reports are to be believed, it seems that Aretha Franklin had a tough year owing to her heath and personal problem. Her son Edward Franklin was beaten up by three men at the Gas Station last September. However, a media outlet recently claimed that Aretha Franklin has pancreatic cancer and this disease has the highest mortality rate. Medical reports show that pancreatic cancer has killed about 95% of patients within 5 years of diagnosis.

'Glee' cast beats out Beatles for Billboard recordNEW YORK — The "Glee" cast has surpassed the Bea...