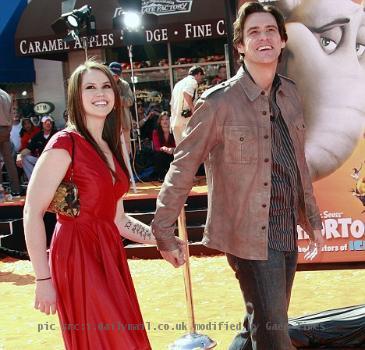 LOS ANGELES (GaeaTimes.com)- Hollywood actor Jim Carrey’s daughter Jane Carrey has reportedly split from her husband Alex Santana after one year of their marriage. This news came as a shock to the Jim Carrey fans and media outlets as it was just nine months before Jane Carrey gave birth to her first child. Jane Carrey and Alex Santana tied the knot last year in front of close family and friends.

On February 27, 2010, the “Liar Liar” actor took to his social networking site to share his happiness after becoming a grandfather. He announced that his grandson’s name was Jackson Riley Santana. The representative of the actor has not commented anything about Jane Carrey’s divorce. The couple has filed for divorce but the reason is not yet unknown. Marleah Leslie, Jim Carrey’s representative told the press that both Jane Carrey and Alex Santana would remain as friends. The representative also said that the couple would remain as the devoted parents of their 9 months old son. Jane Carrey’s mother is Melissa Womer, who the actor divorced in 1995.

Jim Carrey was happy and excited after his daughter Jane Carrey announced her pregnancy. The “Man on the Moon” actor told a reputed media source that he was excited and happy for her daughter. He also said that Jane Carrey would prove to a great mother. Jane Carrey is a singer and songwriter and her husband Alex Santana plays with the rock band “Blood Money”. During her pregnancy, Jane Carrey said that she wanted to feel the bliss of motherhood and at the same time music is her passion. The celebrity daughter said that it is a dream come true for her to pursue music as her career and at the same time to experience the bliss of motherhood.

Telling kids to clean their plate may produce fussy eaters

WASHINGTON - A study has suggested that telling your child to clean their plate may help produce a f...

LONDON - Veteran actress and fitness expert Jane Fonda, who has made millions from her exercise vide...

Fitness queen Jane Fonda says she does not enjoy working out

LONDON - Jane Fonda, who has made millions from her exercise videos, has confessed that she does no...

WASHINGTON - Multi-talented Tyra Banks is all set to direct a two-minute film featuring the final fo...