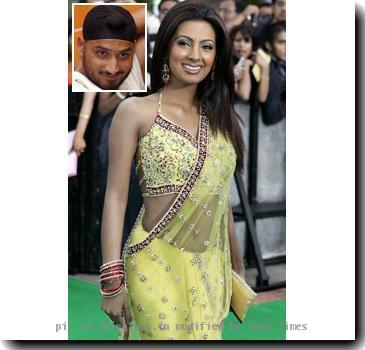 MUMBAI, INDIA (GaeaTimes.com)- Harbhajan Singh apparently could not stay away from his love interest, Geeta Basra for too long. The couple are apparently back together. Just a night before Harbhajan Singh headed towards South Africa, he was spotted once again with his ex-girlfriend Geeta Basra. Apparently the couple parted their ways after the player introduced her to his family. However both seemed incapable of coping with the trauma and are now together once again.

The couple was seen entering five-star suburban hotel together yesterday night. Both of them sported a very passionate body language, and several people who witnessed them together are under the impression that they must have kissed. An eye witness has told to a reputed newspaper that they are together. Since the spinner is on his way to South Africa for a five one-day international, the couple decided to spend some quality time together in the hotel. However, no one could conclude why the actress reacted so weirdly when they were spotted by a photographer. Geeta Basra and Harbhajan Singh got down from the same car, but when she saw the photographer, she started moving in the opposite direction, pretending to be completely ignorant about Harbhajan Singh’s presence.

The photographer was unable to click their snap, as he was strictly warned by the player to not to do so. It seems that even though the Bollywood career of Geeta Basra is moving rather slow, her personal life is rocking once again with the return of her boyfriend, Harbhajan Singh to her life. Now one can only hope that “The Train” of her life does not move as horribly as the movie did a few years ago.

NEW DELHI - The Delhi police arrested Amritpal Singh (55) the owner of the building that colla...

NEW DELHI - Rescue workers Tuesday night continued to dig through the rubble of a collapsed five-sto...

NEW DELHI - The Yamuna river banks in the capital are all decked up as nearly 50 lakh people from Bi...

No guest teachers to be removed: Hooda