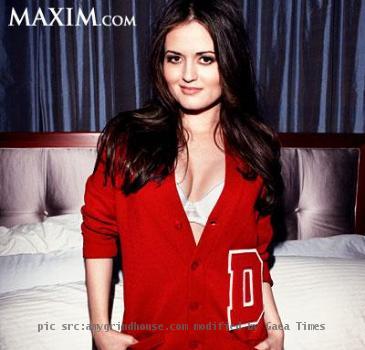 LOS ANGELES (GaeaTimes.com) — Not everyday you get to meet a woman who is excited about getting boobs due to childbirth. But we had the fortune of meeting one recently. Danica McKellar, the actress who is best known for her role as WInnie on the hit tv series “The Wonder Years“, has given birth to a son, and is apparently excited about the direct changes that were the direct result of giving birth to her son.

The actress turned mathematician gave birth to her son on September 7. McKellar’s husband, composer Mika Verta chose the name Draco for their son. “Draco” means “dragon” in Latin and is also a constellation.

Beside the birth of the little dragon, Danica was more excited about getting a proper sized boobs. According to her- “I’ve wanted boobs since I was 10-years-old…I finally got ‘em!”

What do you say people? Feel free to share what you think about this article.

Britain No. 2 diplomat unharmed in Yemen attackSAN'A, Yemen â Assailants fired a rocket at a co...

Britain's No. 2 diplomat escapes attack in YemenSAN'A, Yemen â Assailants fired a rocket at a c...

Power vs Franchitti for IndyCar titleHOMESTEAD, Fla. — The racer in Will Power would love nothing ...