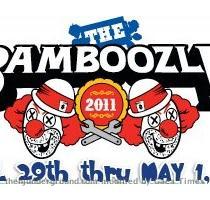 more images
EAST RUTHERFORD (GaeaTimes.com)- No music lover just could help waiting for one of the most popular music events in the nation Bamboozle 2011. Now, that its dates have been declared and the early tickets are being sold, the event has surely intensified the spirit of the music buffs this year. In such a situation, not offering something new to them would have been rather unjustified. Therefore, this year’s event has planned for something new, “The Temple of Boozle”. This event will be debuting this year, to give the audiences a hot flavor of the most sensational DJs in the nation.

With other general event lined up, like pop, skate rock, punk, rock and hip hop, the “The Temple of Boozle” aims cater to those audiences, who love the art of blending music, but could not get it from this event in the last few years. This event would include popular DJs like Super Mash Bros. However, it would also witness several other performances by Boys Like Girls, Born Of Osiris, New Found Glory with Marky Ramone, Texas In July, Oceano, Vanna, Circa Survive, Waka Flocka Flame, Ryan Cabrera, The Ready Set, Transit, Streetlight Manifesto, and the RX Bandits amongst many others. The early bird three-day package can now be purchased at the cost of $99, from the official websites of Bamboozle 2011.

The dates of Bamboozle 2011 have been scheduled from April 29 till May 1. It would take place at New Meadowlands Stadium parking lot in East Rutherford, New Jersey. Last year it attracted more than 80,000 music fans and this year it expects to gather even more. The event has also included the fans for organizing the event and making it more successful, through the “I Booked Bamboozle” contest, where the fans voted for the bands, which they would love to see this year the most.

Wash. money planner gets about 7 years for fraudSEATTLE â A Kirkland financial planner who loot...

LONDON - Singer Cheryl Cole's accent confuses 80 percent of Brits, according to a new survey. The po...

Remarks by the President at a DNC Finance Event in Atlanta, Georgia

England's defeat to Bangladesh not due to leaving out Swann: Strauss

Remarks by the President at Fundraiser Event for Senator Harry Reid

Despite Jabulani wobbles, World Cup gets master passers for its final

World Cup: Ode to the perfect passCAPE TOWN, South Africa — For the climax of the World Cup, it is...
Copyright© 2010 The Gaea Times