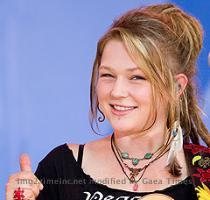 LOS ANGELES (GaeaTimes.com)- Crystal Bowersox rose from obscurity to fame in less than a year after she became the runner-up of “American Idol”. The singer has recently announced her engagement with musician Brian Walker. The representative of the singer has also confirmed that the couple is likely to exchange vows in the month of October.

Crystal Bowersox previously dated Tony Kusian and she has a son with her former boyfriend. The couple separated in the month of May this year, which was just few hours prior to her “American Idol” finale. The singer later gave the reason for her separation as their differences which became prominent in their lives as he was not interested in the big lights of the glamor world. Crystal Bowersox has revealed that her ex-beau was not happy with her lifestyle as he hailed from a “small town”. On the other hand, Crystal Bowersox, being a small town girl is in love with stardom, her “career” and her “lifestyle” as a celebrity. The gossip portals reported that Brian Walker and Crystal Bowersox can be seen together in a video in You-Tube where the latter is seen holding her child in one hand. The aficionados of the singer are already scrambling on web to get a glimpse of the singer’s fiance.

Brian Walker is a musician who also plays acoustic guitar and couple presently live together in Chicago in Illinois. The singer seems to have her hand full of activities as she is reportedly all set to release her new album “Farmer’s Daughter”. Crystal Bowersox recently thanked all her fans for their support and also maintained that she feels blessed as she is doing what she loves to do. She also maintained that presently she is having the time of her life.