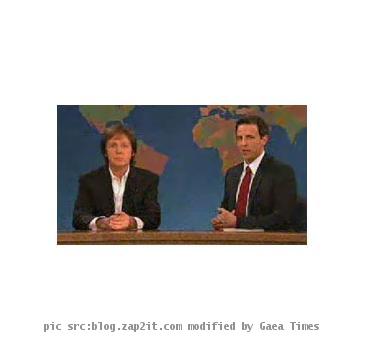 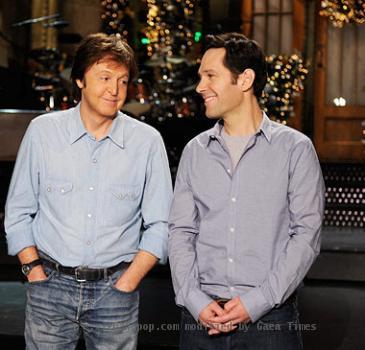 LOS ANGELES (GaeaTimes.com)- The “Saturday Night Live” audience saw legendary musician Paul McCartney and comic actor Paul Rudd giving their best shots to entertain the audience to its fullest last night. Paul Rudd was the host of the night and he promoted his upcoming movie “How Do You Know” where he stars with actors Jack Nicholson and Reese Witherspoon. Paul McCartney paid tribute to his ex-band mate John Lennon of “The Beatles”. “Saturday Night Live” marked the 30th death anniversary of John Lennon and Paul McCartney sang some wonderful compositions of “The Beatles” and “Wings” which kept the audience riveted to their seats.

Paul McCartney also promoted the reissue of 1070’s masterpiece “Band on the Run” which has been reissued on three disc sets along with a DVD of feature film with it. There were few memorable laughs as the host cracked some jokes and performed hilarious sketches. The episode was subtitled as “Paul Rudd / Paul McCartney”. Paul McCartney paid tribute to John Lennon by singing his famous song “Give Peace A Chance”. The audience also sang along with him the refrain part and the host applauded in appreciation. The musician not only sang his own vocals but also sang John Lennon’s part as well in “A Day In The Life”. He performed “Wings” classic songs like “Jet” and “Band on the Run” and then moved on to sing “The Beatles” famous tracks.

Paul McCartney ended his performance with the popular and renowned song “Get Back”. The opening monologue of “Saturday Night Live” showcased host Paul Rudd being excited as the audience call out his name and shout “I love you” but later it is revealed that all the applause was for the songwriter instead. However, when he meets the iconic musician he says that it is an honor to share the screen along with him.

WASHINGTON - A new study has revealed that HIV drugs can lead to insulin resistance that further res...

LONDON - For the first time ever, Stanford University researchers have successfully transformed norm...

LONDON - A study of peak-time British programme has indicated that television dramas too often portr...
Copyright© 2010 The Gaea Times