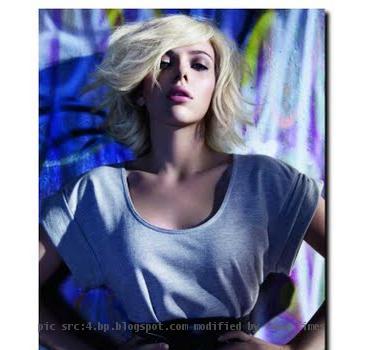 LOS ANGELES (GaeaTimes.com)- Hollywood bombshell Scarlett Johansson appeared on ‘Saturday Night Live’ this week for the third time and like always the actress was her hilarious best on the show. Though the actress’ appearance on the show was much hyped, she took a back-seat when it came to giving the new members of ‘SNL’ a chance to shine.

Scarlett Johansson started off the ‘monologue’ segment talking about her own dynamics with the media and her well maintained low profile. She was seen advising the new generation of stars how to keep a similar profile in front of the media. The list of ‘do’s included wearing underwear and not appearing on reality TV. The segment then went into music mode with the number ‘Whatever Happened to Class’ where the ‘Iron Man 2′ star was joined by a Ke$ha impersonator. Scarlett Johansson kept her appearances limited in the episode but made her impact in the segment about ceramic busts. She also had a brief stint on the ‘Millionaire Matchmaker’ segment with a strange accent.

Known as much for her comic timing as her beauty, Scarlett Johansson is one of the most sought after actresses in Hollywood who has managed to stay out of the tabloids over the years. She recently starred in the ‘Iron Man’ sequel where she played the Black Widow. She has also tried her hand at singing and released an album before. The ‘SNL’ stint was an indication that she still continues to pursue the art. On the show, she appeared with a rather short haircut and also put on a wig in one of the segments. The image was a far cry from her usual glamorous red carpet or on-screen looks.