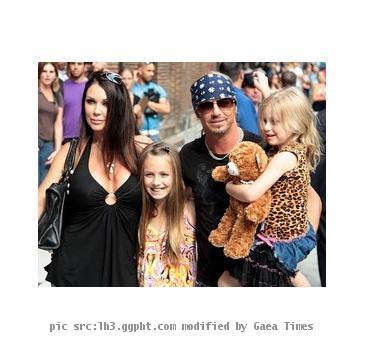 LOS ANGELES (GaeaTimes.com)- Noted musician and reality TV star Bret Michaels has finally proposed to his long time model girlfriend Kristi Gibson, putting an end to the speculation whether the lovers would formalize their relation ever in their life. The Poison front man who had hit the headlines earlier this year after he was hit by a number of ailments, is apparently in top form after getting the nod from his lady love. The star is very happy and so is his model girlfriend. As per the report of a leading celebrity magazine the star had actually thought of making the proposal to the Canadian model earlier but backed out as he had thought that was not the perfect time.

A tabloid has reported that Bret Michaels said in an interview that he felt that he should propose to his lady love after she made him feel that she liked him for his inner qualities and not his fame or money. The rocker had an idea that he would propose to Kristi Gibson in a dramatic and sensational style but changed his mind when the 39 year old beauty said ‘I don’t need this ring, I don’t need the piece of paper, I love you no matter what’. Bret Michaels went on his knees and made the proposal on his show named Life As I Know It finale.

The couple have two daughters and their relation kept their close ones guessing whether they would carry on like that or think of tying the knot. Kristi Gibson said after the engagement that she felt extremely delighted after getting the proposal.

LONDON - An arrest warrant has been issued for Lindsay Lohan's father Michael Lohan. A judge in Suff...

NEW DELHI - Michelle Obama has given Americans a face to love, glorify, follow and one that seldom f...

Biomarker may hold key to early diagnosis of lung cancer

PIERRE, (GaeaTimes.com)- Kristi Noem, the nominee for South Dakota and the republican who is...

After summer of gloom, Democrats see glimmers of hope for Election Day

Democrats see glimmers of hope in election gloomCHICAGO â With only weeks left in the campaign,...