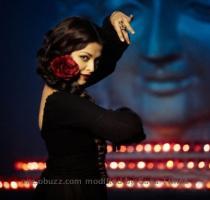 MUMBAI, INDIA (GaeaTimes.com)- Pretty lady Aishwarya Rai Bachchan grabs attention everywhere she goes. After all voted several times in many magazines as the most beautiful woman and a former Miss India who even won the Miss World crown. Recently at an award function in Mumbai, the Bollywood diva had heads turning with her sizzle in a sari. Men who saw her at the event surely had their hearts filled with jealousy for Abhishek Bachchan who is lucky to have her. We wonder how the other ladies at the function must have reacted like. Not difficult to guess that they were busy envying her.

Aishwarya RaiBachchan arrived at the event with father-in-law Amitabh Bachchan. We wonder what had kept hubby Abhishek missing away from her tow! The pretty lady was draped in a blue net nine yards which perfectly suited her. Gorgeous is the exact word that would describe her for the night. Looking amazing in the blue sari Aishwarya Rai Bachchan enhanced her look with the perfect make up and hair do. She had kept her brownish tresses slightly curled. Her blouse was eye catching as the back of it had a deep cut making it seem almost backless.

Aishwarya Rai Bachchan was not only was the center of attraction of that evening for her looks but also hogged the lime light when she walked on the stage to receive the award for Film Actor of Decade (Female). The award was presented to her by Tina Ambani and Javed Akhtar. She sat at the function ceremony with her father-in-law and had Tina Ambani for company. Just behind Aishwarya Rai Bachchan sat her former lover Salman Khan’s sister-in-law Malaika Khan Arora. The Salman connection never seems to be much distant from Aishwarya Rai Bachchan!