Alia Bhatt In “Student Of The Year” 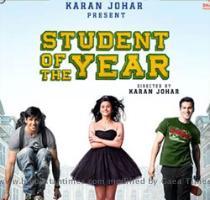 MUMBAI, INDIA (GaeaTimes.com)- Renowned film maker Mahesh Bhatt’s daughter Alia Bhatt is all set to make her Bollywood debut this year. Interestingly the 17 year old is not making her launch pad in the B-town with daddy’s venture. Instead the girl has seized the attention of many after the news broke out that she is making her debut with none other than a Karan Johar directorial. The recent news that is making waves in the tinsel town is that of Alia Bhatt making her debut with Karan Johar’s “Student Of The Year”.

However, Alia Bhatt is not the only one for whom it will be a Bollywood debut. Audience other than the Bhatt girl will also get to see two other new faces which includes Varun Dhawan and Siddharth Malhotra. Varun Dhawan is the younger son of director David Dhawan who is famous for his comic flicks. The news of Karan Johar’s “Student Of the Year” shot up after the director unleashed the first look of his film on his micro-blogging site. This will be his first directorial flick of 2011. The movie is slated to release in February. The movie which is being made under the joint production of Red Chillies Entertainment and Dharma Productions is likely to have a cameo of Shah Rukh Khan without whom all Karan Johar movies are incomplete.

LUCKNOW - A teacher of a government-run primary school here has been booked for allegedly beating up...

GANDHINAGAR - The Gujarat High Court Monday disposed a contempt of court petition in the 2004 Ishrat...

NEW DELHI - To further boost India's economic ties with the Gulf region and to promote trad...

GAYA - Two Maoists were arrested by the Bihar Police in Gaya during a police raid in some areas ...