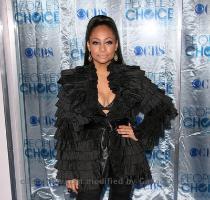 LOS ANGELES (GaeaTimes.com)- Now one seriously has to say “That’s So Raven”, to Raven Symone. The 25 year old Disney heartthrob, has lost tremendous weight to take many people aback in the recent People’s Choice Awards. She sported a fitted black leather pant and a frilly deep necked black top, to throw the biggest surprise and several people in the tinsel town, who found her fat and obese, now envy her new toned figure.

Raven Symone however feels that she loved her over weighed body many times more than the new one. She said that she loved being referred as “Thick And Fabulous”, and added that she looked better before, but no one else did. Perhaps that is why, she opted to lose her weight and sport a slimmer body. Raven Symone, unlike other slim stars, prefers wearing loose and bigger clothes, as she does not feel comfortable with the way people stare at her. She feels that now people stare at her for the “wrong reasons”, or to put it in a better way, people look at her for the “Real Reason” these days.

Nevertheless, people are still wondering what made her loose her weight so miraculously, within such a short span of time? Where many of the stars literally struggle to shed off those extra pounds, Raven Symone lost it as soon as her popular Disney show, “That’s So Raven” was called off air. She said that at times stress leads to weight gain. Therefore once the show was over, she was left with relief, without any tinge of stress. She used to spend her time at home, decorating it and finding new hobbies. She also summed up and said that her weight loss was “natural”.

LOS ANGELES (GaeaTimes.com)- The 'Black Girls Rock!' event that was telecast on BET network on S...

Lady Gaga 'has a soft spot for fish 'n' chips'

LONDON - Lady Gaga sure loves fish 'n' chips - the diva stopped her tour bus so she could tuck into ...

LONDON - A study has revealed that young New Caledonian crows learn to use tools by going to ...

LOS ANGELES (GaeaTimes.com) -- Girls, here is a bad news for you all. Justin Bieber has been cau...

Otters back from the brink of extinction in England

LONDON - Environment Agency has revealed that the otter has made a remarkable comeback from ...

NEW YORK - Do you crave for a cup of coffee early in the morning? And a chocolate bar makes you fee...

NEW DELHI - After rocking US box offices with its stupendous success, horror movie "Piranha 3D" will...

Can NFL Least teams make the most out of non-division games Sunday?

Can NFL Least turn it around?Things could start getting sorted out in the NFC Least, uh, East, this ...

Jets' Jenkins to attempt comeback from knee injuryNEW YORK — Kris Jenkins is not ready to call it ...

No power teams in NFL 2010Pretty soon the 1972 Miami Dolphins can relax, a whole lot earlier than la...
Copyright© 2011 The Gaea Times