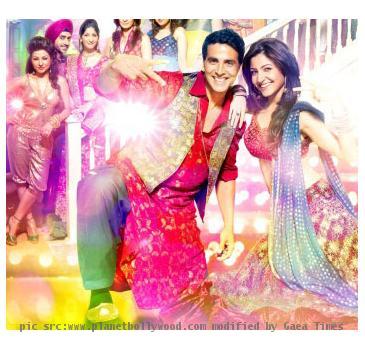 MUMBAI, INDIA (GaeaTimes.com)- The Khiladi of Bollywood is all set to hit the silver screen once again with his upcoming film, “Patiala House”, and much to the surprise of many people, Akshay Kumar would actually be portraying the role of a cricket ‘khiladi’, in contrast to the action ‘khiladi’ he has played so far. For a change, the actor would romance Anushka Sharma, after deciding to take a break from his sizzling on screen chemistry with Katrina Kaif. Now one only has to wait and watch, how this new chemistry works out.

The film also stars Rishi Kapoor, who plays Akshay Kumar’s father in the apparently authoritarian “Patiala House”, where the former in the monarch. However, unlike other sports oriented film, this one is not completely about sports. Director Nikhil Advani says that it is rather about the conflicts between a father and son. The patriotic and occasionally fanatic father, does not want his son to play cricket for England, despite residing in that nation for several years. However, the son stays rigid to his decision, and therefore the two come into cold terms. With the warm support of lady love, Anushka Sharma, the protagonist attempts to materialize his dreams of playing the World Cup, against the wish of his father.

However, apart from the hot star cast, the film would also feature other leading cricketers like Wasim Akram, Brendon McCullum, Andrews Symonds, Nassir Hussain, Graham Gooch etc. Since the story involves playing for the World Cup, the director felt that featuring some strong faces from the world of cricket was something that the script demanded. “Patiala House” is produced by Hari Om Entertainment Company, People Tree Films and T-Series. Most the film has been shot in UK, and is especially centered around Southall, London.