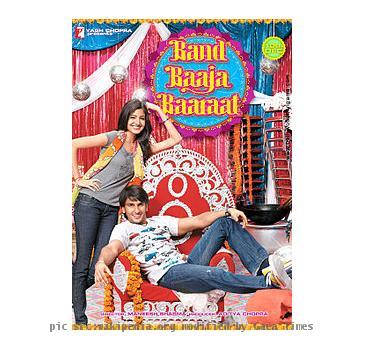 MUMBAI, INDIA (GaeaTimes.com)- The latest presentation of the Yash Raj Films starring Anuskha Sharma and newcomer Ranveer Singh “Band Baaja Baaraat” has been successful in seizing many eye-balls among the college going crowd. The film which is slated to hit theaters today is expected to get a warm reception from the young audiences as the peppy, feel-good factor that the movie projects has been able to strike a chord with them. The Yash Raj flick will have to battle it out with the multi-starrer “No Problem” which is releasing at the same date but the fact that both the films belong to comedy genre might prove to be a major hurdle in ensuring that the cash registers are ringing for both the projects.

One of the highlights of the flick “Band Baaja Baaraat” which is likely to go in its favor is the fresh feel of the movie as it brings together a new couple, Anushka Sharma and debutant Ranveer Singh. Despite the fact that the Yash Raj flick does not boast of any big stars, the vibrant chemistry between the lead actors has already managed to attract much attention among the movie-goers. The Yash Raj movie also marks the directorial debut of Maneesh Sharma and it basically tells the story of two wedding planners played by Anuskha Sharma and Ranveer Singh who start their own business venture and in the process rediscover themselves.

For actress Anushka Sharma, “Band Baaja Baaraat” would be her third movie with the Yash Raj Productions. The former model made her debut opposite Bollywood superstar Shahrukh Khan in the 2008 flick “Rab Ne Bana Di Jodi” and later also starred in “Badmaash Company.”