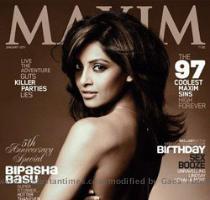 MUMBAI, INDIA (GaeaTimes.com)- If the winter is chilling your body temperatures just take a look at the recent cover page of Maxim. The January 2011 issue of the popular tabloid is sure to raise your body temperatures for Bong beauty Bipasha Basu leaves you with no other choice. The Bollywood bombshell has bared it all for the magazine looking sexy from every inch, going on to raise eyebrows ever since the cover page of Maxim got unleashed.

Those who already had a glance at Maxim’s cover page at once agreed that the actress’s appearance is soaring the heat even amidst the January cold. Bipasha Basu who had always made news for her sensuous appeal is in great shape and that the toned look on her body is evident. According to media reports, the actress had posed for the famous Maxim magazine for their 5th anniversary issue. Ever since the pictures of the Bollywood hottie appeared on the website of the popular magazine, the Internet was flooded with viewers who were desperate to catch a glimpse of the Bong babe’s latest photo shoot.

The news of Bipasha Basu’s sizzling photo on Maxim’s cover page is sure to raise the sales of the tabloid this month. After seeing the picture it would be easy for any one to guess that the actress has already drawn the envy of many. The siren beauty recently turned 32 and with every passing day she seems to get younger. No doubt the “Corporate” actress is giving her other colleagues a run for money. We wonder how beau actor John Abraham has reacted to the steamy photos!

NEW DELHI - If you look deep into her dreamy eyes, you might find love - along with a pair of colour...

I want to dress up Bipasha on her wedding: Rocky S

NEW DELHI - Desiger Rocky S., who has been a friend of actress Bipasha Basu for over a decade, says...

I would love to play Draupadi: Bipasha Basu (Movie Snippets)

NEW DELHI - Thanks to US President Barack Obama's visit, the roads in Mumbai were repaired and Boll...
Copyright© 2011 The Gaea Times