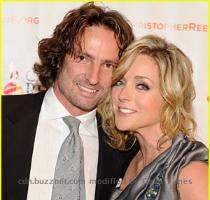 The “30 Rock” star who has been engaged with the Psycho Bunny designer since last January cannot hold on to her happiness which got evident as they both continue to holiday in the romantic Caribbean isles. Eyewitnesses who spotted Jane Krakowski on the beach sporting a one piece bikini said that the baby bump was visible. A source close to the famous “Ally McBeal” star and her British born fashion designer boyfriend Robert Godley divulged that both them who are about to be parents for the first time cannot stop gushing about the recent development in their lives. Preparations have already begun to welcome the new member in the family. However, they chose not to reveal as to when is the actress supposed to give birth to the child.

The couple whose prime focus is now centered around their bundle of joy who will be arriving soon this year however are yet to tie the knot. They have been engaged for about a year but never revealed anything which showed their interest for exchanging the marital vows. With the news of Jane Krakowski many have started speculating that the couple may now think of exchanging rings. Ever since the news of her pregnancy broke out the couple have been receiving numerous congratulatory messages from well wishers.

Telling kids to clean their plate may produce fussy eaters

WASHINGTON - A study has suggested that telling your child to clean their plate may help produce a f...

LONDON - Veteran actress and fitness expert Jane Fonda, who has made millions from her exercise vide...

Fitness queen Jane Fonda says she does not enjoy working out

LONDON - Jane Fonda, who has made millions from her exercise videos, has confessed that she does no...

WASHINGTON - Multi-talented Tyra Banks is all set to direct a two-minute film featuring the final fo...