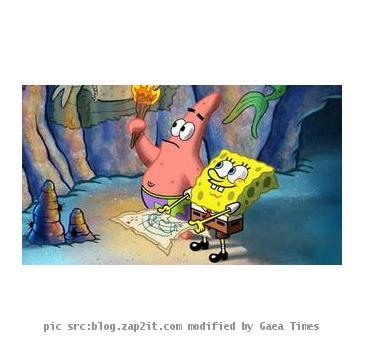 LOS ANGELES (GaeaTimes.com)- The 12 year old popular marine creature, Spongebob is all set to get more tech savvy. The cartoon character arrived on Facebook too, in order to gather more fame, fan and popularity. The five-episode series, that was premiered on Facebook on Thursday, has been named as “Spongebob Legends Of Bikini Bottom”.

According to the sources, “Spongebob Legends Of Bikini Bottom” has already gathered more than 16-million fans, as Spongebob first introduced the series on his very own Facebook page. The first episode, entitled as “Trenchbillies” became quite popular and commanded a very strong footing on the social networking site. It was aired on Thursday in the social networking site, just one day before it is aired on Nickelodeon. Each episode can be watched for two weeks on Facebook, and then another new episode will be featured again. The two guest stars who lent voice for the characters of Ma Angler and the Mermaid are Amy Sedaris and Gennifer Goodwin respectively. The show is centered around SpongeBob and his friend, Patrick, the star fish, who are captured, and has to undergo a lot of trouble in order to rescue themselves and get freedom.

The story line of “Spongebob Legends Of Bikini Bottom” seems interesting and even the first episode was quite well received by the Facebook fans all over the world. It is expected, the promoting the character through Facebook, will increase the character’s popularity in a mass scale and introduce Spongebob to several other children who were unknown to him. The other episodes that have been lined up on Facebook are, “Sponge-Cano”, “The Main Drain”, “The Monster Who Came to Bikini Bottom”, and “The Bikini Bottom Triangle”.