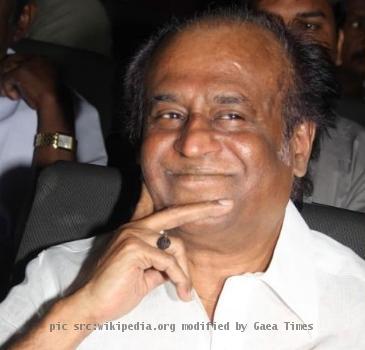 CHENNAI, INDIA (GaeaTimes.com)- If somebody has the potential to portray a triple role in a film with full conviction, then the first name to hit our mind is our very own Rajinikanth. His South Indian fan following has still not been able to get out of the “Endhiran” hangover, but the omni potent actor has decided to once again set the screen on fire with yet another animated motion picture, “Raana”.

This film was originally names as “Sultan The Warrior” and then it was changed into “Hara”. However, if Rajinikanth is the hero, then the producers have to give special attention to the name of the film, and that especially holds true, if the producer is none other than the idol’s own wife Latha Rajinikanth, who finally settled for “Raana”. She would be producing the film for Ocher Studios. “Raana” would be directed by their daughter Soundarya Rajnikanth, who recently rescued herself from the huge debt of Rs 10 crores. Thanks to her big shot super hero dad, that all her deadly debts have been cleared. Now, the entire family is completely free from any financial hassle, and that is why, the shooting of “Raana” seems like a family blast on the sets, with a producer wife and director daughter. However, Soundarya Rajnikanth felt that she might be still incapable of directing some of the fictitious parts of the film, and therefore she has assigned KS Ravi Kumar to take the charge of the direction partially.

The beautiful South Indian hottie, Trisha, will be featured in the last 28 minutes of this other wise male centric film. Infact, according to many sources, getting her featured in “Raana” was one of the main reasons for altering its title. She was recommended by KS Ravi Kumar, who thinks she can incorporate some elements of glamor to make the film work better.