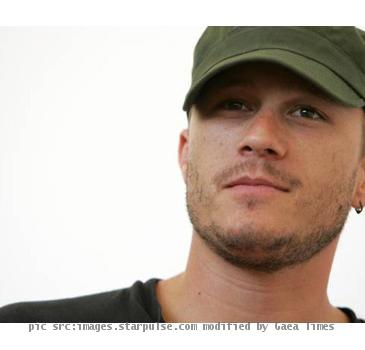 LOS ANGELES (GaeaTimes.com)- On his third death anniversary the millions of fans of late Hollywood actor Heath Ledger are paying tributes to him online. The actor proved his mettle in the showbiz by acting in a number of critically acclaimed and commercially successful films that fetched him many awards and love of the viewers. The actor who took villainy to unprecedented heights in Christopher Nolan’s The Dark Knight died at the shockingly young age of 28 on January 22nd 2008 owing to accidental prescription drug overdose. He shot to fame with his unforgettable portrayal of Ennis Del Mar in Academy award winning Brokeback Mountain where he essayed the role of a closeted gay cowboy. With ‘The Dark Knight‘ he reached the acme of his career but his sudden and unexpected death put an end to his journey in Hollywood.

The fans of the late actor Heath Ledger are paying tributes to him via popular social networking and blogging services. In ‘The Dark Knight’ his performance as the complex and sadistic antagonist joker overshadowed Christian Bale who played Batman in the film. A lot of fans of the actor still keep watching the movie for his stellar performance as they have written in their posts.

A number of online forums and fan groups have been made in Orkut and Facebook in the memory of ‘The Dark Knight‘ actor which proves that his absence has not affected the love of his fans. His success in Hollywood was phenomenal and his co stars still remember him as a talented actor who was capable of giving a lot more had it not been for his destiny.