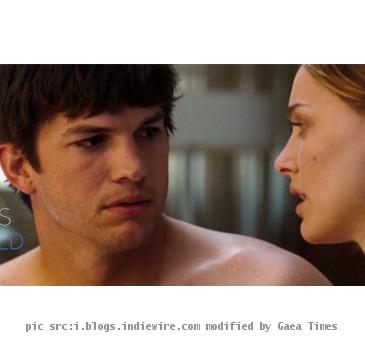 LOS ANGELES (GaeaTimes.com)- The much talked about Paramount romcom ‘No Strings Attached, ‘ is hitting the theaters this week and reviews have started pouring in. Despite lukewarm critical reception the movie is expected do well, mainly owing to the recent Golden Globe win by its female lead, pretty actress Natalie Portman. The movie seeks to solve the riddle, if two lifelong friends can remain involved with each other only fort lust and not love. Needless to say the steamy promos of the movie made the viewers curious which showed the two sizzling actors cozying up for several times. In fact the movie has a number of intimate scenes and by Hollywood standard they are rather decent!

Initially both of the actors felt a tad awkward cozying up to each other for those intimate scenes and undressing but they got over the jitters later. Recently both Ashton Kutcher and his on screen lover Natalie Portman said how they executed the sex scenes in the movie ‘No Strings Attached’. The actor said that they had to walk barefoot on the sets during filming those scenes and as a result his feet often got dirty. He admitted that he felt easy going to bed with dirty feet. He said to a media entity that “We were walking around getting ready to do the scene, and the set floor was a little dirty, so we both had really dirty feet. That was weird, I don’t know why. No dirty feet in bed.”

In ‘No Strings Attached’ actor Ashton Kutcher used to wear sweatpants while shooting the bed scenes with his co star. However, actress Natalie Portman was not allowed to wear that.