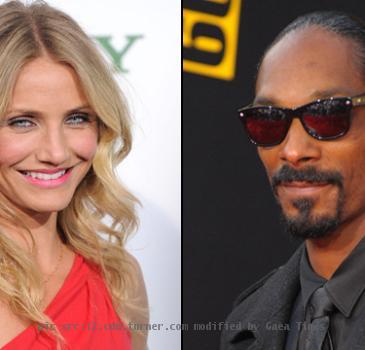 LOS ANGELES (GaeaTimes.com)- George Lopez’s late-night TBS talk show “Lopez Tonight” is known for its high entertainment quotient which always manages to keep the viewers asking for more. The celebrity chat show which made its debut in 2009 has gradually earned the reputation of being among the most entertaining programs that TBS network has to offer. Things were no different this week as well when Hollywood diva Cameron Diaz made an appearance on the talk show, in turn ensuring that the viewers have a gala time.

In conversation with George Lopez, the 38-year-old actress talked at lengths about a variety of topics which included details about her forthcoming movie ventures as well as information about her personal life. However, the highlight of the episode turned out to be the segment where the “Charlie’s Angels” star reveals details about her growing up years in high school during which she claims that she had to buy pot for none other rapper Snoop Dogg! The 39-year-old rapper who has been in the news over the years for his marijuana usage, studied in the same high school in Long Beach, California that was attended by Cameron Diaz.

While talking about her high school experience with the troubled rapper on the George Lopez’s late-night chat show, Cameron Diaz said that in those days, Snoop Dogg was ‘very tall and skinny and wore a lot of ponytails in his hair.’ The 38-year-old actress further went on to add that during their high school days, she had to get weed for the rapper while emphasizing, “I had to have!”

SYDNEY - Australian off-spinner Jason Krejza has quashed speculation that it was because he had f...