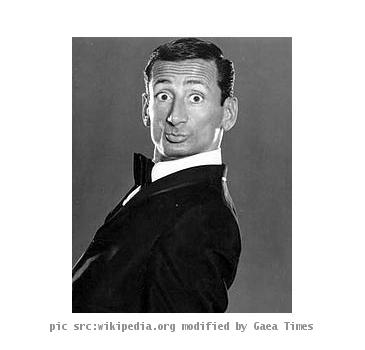 LAS VEGAS (GaeaTimes.com)- All the ardent followers of much-acclaimed comedy artist Charlie Callas have over the years known him for his signature rubber-faced antics and rapid-fire delivery that made him an instant favorite among his viewers. All his fans were in for a shock this week when it came to light that the noted comedy artist passed away at a Las Vegas hospice care. As expected, the news of Charlie Callas‘ demise has left all his ardent followers highly disappointed considering the fact that the stand-up comedian is known to have entertained them for decades. Charlie Callas was 83 and is survived by his two sons, Mark and Larry Callas.

Although the exact cause of the comedian’s demise has not been revealed to the media, his son Larry Callas said that following the death of his mother Evelyn in the month of July last year, his father was left extremely broken-hearted. As his health condition worsened over the last few days, Charlie Callas was put under hospice care where he breathed his last on Thursday. Family sources have divulged that the funeral arrangements are being made at the Las Vegas based Palm Mortuary.

During his career spanning across decades, Charlie Callas became a well-known face in television, films as well as the casino stage while entertaining his audience to the fullest with his trademark sense of humor. Over the years, the stand-up comedy artist went on tours with Frank Sinatra as well as Tom Jones while making as many as 50 appearances on the “Tonight Show Starring Johnny Carson,” among a variety of other television shows.